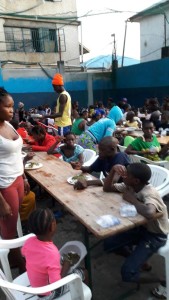 Don Bosco Fambul in Freetown is assisting 300 children and young people affected by fatal mudslides in the Regent area of the city as Sierra Leone entered a week-long mourning period for the victims of the flooding that has killed more than 400 people, with fears that the death toll could rise as 600 remain missing. AFP news agency reported on Wednesday that among the dead were at least 105 children.

According to the National Weather Service‘s Climate Prediction Centre, Sierra Leone had been in the midst of a particularly wet rainy season, with the capital city of Freetown, in the Western Area of the country, experiencing 41 inches (104 cm) of rainfall leading up to the mudslides since July 1, 2017 – nearly tripling the area’s seasonal average. From August 11 to 14, Freetown received three consecutive days of downpours, which led to severe flooding in the city and its surrounding suburbs. Early in the morning on August 14, 2017, massive landslides and flooding hit residential areas of Freetown, the Capital of Sierra Leone. While the exact number is not yet certain, disaster-related deaths are estimated at 500; hundreds of others are missing and feared dead (more than 600). More than 5,000 people were left homeless and hundreds of buildings were damaged or destroyed by the mudslides.

The Government through the Ministry of Social Welfare and the Office of National Security contacted Don Bosco asking to care for children and women. Since 14th August, Don Bosco Fambul has turned to an improvised shelter/camp, especially for  children/babies and  mothers/women victims of the floods/landslides. Some of the children are displaced children (they have lost their homes and all properties), some are orphans and some are just children lost during the chaos of the flooding and so fart nobody has claimed for them. Unfortunately, many of them have been injured during the catastrophe and need continuous medical assistance. They receive food, clothes, the possibility of taking showers, sleeping place and medical assistance. Educational and recreation activities are organized for the children. Pictures and names of the children have been placed on the entrance notice boards for parents who are seeking for their missed children. All the staff of Don Bosco Fambul continue with their regular programmes and a roster has been done with the names of staff of each department and programme to support the accompaniment of the victims. Other 30 people have been called in to support the emergency programme in a permanent way with the coordination of activities, execution and follow-up of the response (6 social workers, 13 interns, 11 junior staff). The children and mothers are accompanied 24 hours.

The government has asked Don Bosco to care for 300 children and women, most of them mothers of the children and nursing mothers for a period of 2 months until a permanent solution can be found for those who have lost their homes and all their properties.