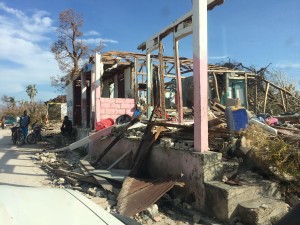 Hurricane Matthew, one of the most catastrophic tropical storms of the past decade, has hit Haiti very hard. At least nineteen people have died.  This is a Category 4 storm with winds that have reached a speed of 230 km per hour. The southern part of the country was the part most affected by the hurricane. The Salesians are safe and well, but the community at the entrance of the southern city of Les Cayes suffered considerable damage, although the buildings were able to withstand the strong winds.

The hurricane has stunned the entire country. All Haitian schools will remain closed until next Monday 10 October.  Now the storm is heading for the Bahamas and the South East of the United States. The presidential elections in the country scheduled for next Sunday have had to be postponed.  The Salesians have also had to postpone the celebrations for the 80th anniversary of their arrival, originally scheduled for yesterday 5 October.

“Communications with the southern areas of the country are very difficult. The Salesians are trying to help the most vulnerable people, because it is feared that, with the overflowing of several rivers and the flooding of many roads, there could be a resurgence of cholera which has been present in the country for six years,” said Fr Hubert Mesidor, Salesian Social Communication Delegate of Haiti, in an interview with ANS.

The Salesians in Les Cayes have succeeded in sending information on the condition of their work. The main gate was torn off, the electrical system of the house collapsed, an administration building and another structure used to celebrate Mass were damaged and the playground was totally devastated. Not a single tree survived and all the farm animals perished. The cathedral and a couple of other churches in the city have been affected and have had the roof blown off.

The Rinaldi Foundation, active in Haiti, still cannot say much on the need for action, since up to now it was very unwise to go outside. However, it is ready to act, well aware that in the whole southern area there will be many situations of ​​need.

Hurricane Matthew has aggravated the situation of many families who were already living in extremely difficult conditions following the earthquake of 12 January 2010.