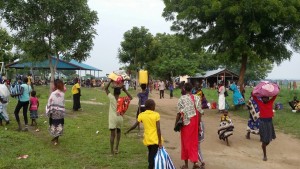 (Rome, July 15, 2016) – Between Sunday and Monday last, thousands of frightened people sought refuge in the Salesian mission at Gumbo, 8 km from the centre of Juba, in South Sudan, because of the resumption of armed clashes. Now the mission is home to a huge number of people: between 5,000 and 8,000 by day, a number that increases at night because many return there to sleep. And they need everything: food, water, basic necessities.

In Gumbo explosions and gunfire were heard clearly, especially in the afternoon and evening of Monday 11 July even after the cease-fire by both sides had been proclaimed. “Gunfire, bursts of machine gun and bullets rose into the sky like fireworks.  Within a short time the shooting came from all directions, and even approached our compound,” according to Salesian missionary Bro. James Comino.

Since Sunday evening, the Salesian mission began to welcome hundreds and then thousands of fleeing people, mostly women and children. “Suddenly hundreds of people started arriving at our compound, mostly mothers, each with a child on her back and another 4-5 year-old by the hand, carrying on her head a large bundle with whatever essentials she could carry,” Bro. James continued.

From the outset the Salesians welcomed them and gave them all possible help: they opened the doors of the school and the church, and fed them from the food reserves that the various international organizations had allocated for the refugee camp. And they’re doing everything to provide a welcoming home for those in need.

But the mission cannot cope alone with the needs of several thousand refugees, especially because of the impossibility of getting new supplies since the roads and the airport are blocked.

For this reason the Salesians wish to be the voice of the voiceless, the poor people who came to the mission en masse and with virtually nothing. We therefore extend an invitation to the international community, NGOs and the general public not to turn the other way, but to act quickly in the appropriate fora, to ensure that the ceasefire holds and to persuade the rival groups to return to dialogue so that the people may enjoy their right to peace and social stability in the area. 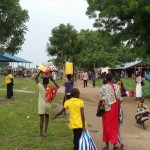 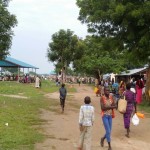 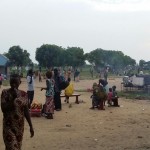