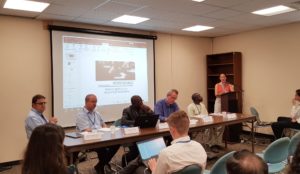 From Tuesday, July 9, to Thursday, July 18, the annual High-Level Political Forum (HLPF) took place at United Nations headquarters in New York City. The program attracted more than 2,000 participants, including some 100 government ministers. Over 40 countries have presented their Voluntary National Reviews.

The HLPF is the main U.N. platform for follow-up and review of the progress made toward the 2030 Agenda, consisting of 17 Sustainable Development Goals (SDGs) that were set out in 2015.

The theme of this year’s meeting was “Empowering people and ensuring inclusiveness and equality.” Included on the program were an in-depth review of SDG 4 (quality education), SDG 8 (decent work and economic growth), SDG 10 (reduced inequalities), SDG 13 (climate action), and SDG 16 (peace, justice, and strong institutions). In addition SDG 17 (partnerships for the Goals) is reviewed every year.

According to Inga Rhonda King, president of the U.N. Economic and Social Council (ESOSOC), the entity that supports the HLPF, this event is a global platform to showcase experiences and forge partnerships, an “unprecedented opportunity to talk to each other and learn from each other.”

In this context the Salesians, through Fr. Thomas Pallithanam, our representative at the U.N., proposed two side events during the main forum, on July 10-11, in partnership with other institutions, such as Misean Cara from Ireland.

According to the organizers, it is really important that whenever possible the Salesians make efforts to promote this kind of activities and actively participate in major U.N. events. Wojciech Mroczek, Don Bosco Network coordinator, stated: “When you participate in some structures and events, this is how to be heard. This is when you have an influence. This is a different type of missionary work. All the structures already exist, so if we don’t present our voice, there is no voice of the Gospel in these institutions.” In addition, these forums offer a great opportunity for networking and improving the public relations of Salesian Missions, which benefits all Salesian works around the world.

The first one side event, “Addressing Inclusion, Inequality, and Institutions,” had connections with almost all the SDGs under review this year, except no. 13. That Goal was discussed intensely in the second side event, “Youth Aspirations and Climate Urgency.” (See separate article, reported by ANS.)

For the first side event, the Salesians invited selected representatives from Salesian projects which have a capacity of advocacy in their realities at local and national level and are part of the discussion about implementing the SDGs Agenda.

Young people were invited to lead the discussion about climate change, particularly by presenting the Don Bosco Green Alliance. The young activists came to New York to share their concrete experiences and led the conversation about “hope and aspirations in a world that threatened by the adverse effects of climate change and threats to environment, ecology, society, and economy.” According to Fr. Savio Silveira, founder of the Don Bosco Green Alliance, “It was truly inspiring to engage with these young people, each of them from a different continent, all of them committed to the cause of climate action, because they feel strongly that climate change is threatening the aspirations of young people.”

All panelists, moderators, and organizers of side events were subscribed as participants of the whole HPLF. Since most of them were from Salesian works, the Salesians enjoyed a great representation during the event, specially through the young people, who had the opportunity for a special experience in their lives and were able to strengthen their convictions as activists and changemakers connected with the Salesian charism.

The first side event, on July 10, was promoted in partnership with Misean Cara. The discussions and reflections of this session focused on the Voluntary National Reviews process in the participating countries and the possibilities for strengthening VNR mechanisms and the evaluation of the SGDs, in order to achieve them. The section was moderated by Eamonn Casey, project officer for human rights at Misean Cara.

The keynote was presented by Sandra Epal-Ratjen, international advocacy director of Franciscans International. She highlighted the need to promote accountability, since the SDGs are voluntary. “They are political commitments, [but] there is no political obligation to the SDGs.” On the other hand, human Rights are legal obligations and need to be monitored. So, according to Ms. Epal-Ratjen, human rights obligations can be used to hold governments accountable. “Because we have a record of complementarity correspondence, we can use human rights more effectively to attain and infuse this accountability and these legal obligations, which nations should declare will be put in place to implement and achieve the SDGs,” she argued.

Ms. Epal-Ratjen gave the example from Uganda, where she works; together with other NGOs and civil society colleagues, the Franciscans have decided to be engaged more in monitoring, which will enable them to call for more policies.

In general, she maintained that to look at the SDGs from the human rights perspective can be the best way to monitor more precisely and give visibility to particular issues and find solutions to attain the SDGs. Systems of measurement and monitoring of human rights and SDGs require more dialogue among participating governments and NGOs.

To complement the discussion, the panelists presented their own grass roots experiences and learnings. They were all from Africa, but different countries, projects, and realities, two of them from Salesian presences.

Samuel Thomas Bojohn, assistant director of Don Bosco Fambul, in Freetown, Sierra Leone, described how the Salesian work with the victims of trafficking and prostitution. This work corresponds with SDGs 4 and 8, and enables the Salesians to advocate for government accountability.

Finally, Colin Kenneth Northmore, director of Three2Six , a Marist program in South Africa, shared the experience and efforts to give access to education for migrants and refugee children, through the action, advocacy, and sensitive work with the institutions and society to generate inclusion and justice.

The audience was really attentive during the session and interactive. After the panel presentations, many good ideas and perspectives, especially about minority groups and how to take them into account, and questions about relationships with governments helped to deepen the discussion and induced the panelists to bring forth more detailed information and ideas.

During the conclusions and recommendations, Mr. Mroczek highlighted the importance of networking and the necessity of inclusion, points that featured during the whole main event and all the discussions.

An invitation to brainstorm produced more recommendations. Participants also have the possibility of sending additional contributions.

Fr. Pallithanam and the representatives of Misean Cara and Don Bosco Network commented that they were very happy to engage with other people about marginalized populations in the side event. The participants look forward to keeping in touch and making further observations.

A panel discussion on ‘Youth Aspirations & Climate Urgency’ was organized on 11 July as a side event at the ongoing United Nations High Level Political Forum (HLPF) at New York, by “Don Bosco Green Alliance along with Salesian Missions USA and Don Bosco Network” (DBN).  The HLPF annually evaluates the global progress of the Sustainable Development Goals (SDG), hence, this panel discussion focused on SDG 13 Climate Action and the impact of climate change on young people and their future.

The event began with the Ambassador of Samoa, Mr. Ali’ioaiga Feturi Elisaia welcoming the gathering.  The keynote address was then delivered by Archbishop Bernardito Auza, Permanent Observer of the Holy See to the United Nations.  Quoting extensively from Laudato Sì in his speech, Archbishop Auza said: “Young people demand change.  They wonder how anyone can be talking about their future without addressing environmental issues.”  He further went on to say: “Young people play a critical prophetic role; we must listen to their voice.”

During the panel discussion, talking about rising sea levels caused by climate change, September Kelokelo described the drastic impacts on Small Island States like Papua New Guinea.  “Climate change is real, and it is happening. With sea waters rising, our dreams are going down the drains. Our islands are in danger, our future is being threatened,” she said.  Describing activities taken by his school, Santiago Corrales said: “We don’t need laws to get us to act.  We feel the urgency and we are responding.” He urged the young people to lead the way to action.

“Climate change is impacting crop production, causing flooding and increasing diseases in my country,” said Abigail Gyabaa.  “Because of the floods, children often have to abandon their schooling,” she added.  “The youth of Europe are angry because of the slow response of our governments to the climate crisis,” said Rebecca Petz.  Emphasizing the connection between human rights and environmental protection, Petz pointed out that the climate crisis was adding to the refugee crisis and other social issues.

The presentations by the panelists was followed by a very lively open discussion.  Several young people in the audience made a passionate appeal for strong and immediate action.  Climate change education in schools, promotion of low carbon technologies, stringent taxes on carbon emissions, elimination of single use plastics, and political engagement by young people to further climate action were some of the suggestions that emerged from the discussion.

Summing up the discussion, the former President of Kiribati, Mr. Teburoro Tito, urged the young people not to lose their passion and commitment.  “You feel very strongly today about the climate crisis,” said Tito, “don’t lose that fire, don’t give up that fight.”  He further encouraged the young people to come together and demand change from their governments.

Speaking about the side event, Fr Thomas Pallithanam, the Salesian representative at the UN, said that he was happy that young people had the opportunity to voce their opinions on the important subject of climate change.  “It was wonderful that we had four young people from four different continents on the panel. They represented Salesian youth worldwide.  Young people today feel the urgency of climate action and other environmental issues, and we Salesians must support them in responding to these challenges.  I am glad that Salesian Missions was able to facilitate this event and bring these voices to the UN,” said Pallithanam.

The four young panelists now return to their home countries as ‘green ambassadors’.  “I now no longer represent just myself, or even my institution, I represent my country,” said September Kelokelo.  “I now have the responsibility to work for my country and its young people, so that the climate crisis does not destroy their future and their aspirations.” 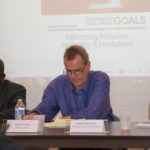 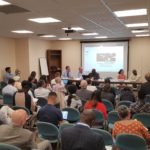 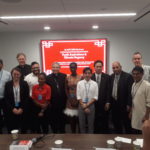 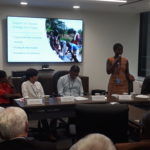