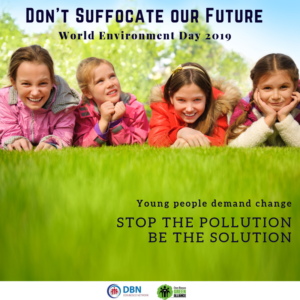 Don Bosco Network and the Don Bosco Green Alliance as well as the international community is celebrating World Environment Day. The day, which is celebrated annually on June 5, will be hosted by China this year and focus on the theme of “Air Pollution.”

According to the United Nations Environment Program (UN Environment), approximately 7 million people worldwide die prematurely each year from air pollution, with nearly 4 million of these deaths occurring in Asia-Pacific. World Environment Day 2019 urges governments, industry, communities and individuals to come together to explore renewable energy and green technologies and improve air quality in cities and regions across the world.

UN Environment has noted that 92 percent of people worldwide do not breathe clean air. Air pollution costs the global economy $5 trillion every year in welfare costs. In addition, ground-level ozone pollution is expected to reduce staple crop yields by 26 percent by 2030.

In response to the day and the call for awareness on this important topic, Don Bosco Network and the Don Bosco Green Alliance have launched an awareness campaign, “Don’t Suffocate Our Future!” focused on air pollution. UN Environment notes that studies have shown that air pollution not only affects the physical health of an individual, but also mental health.

Poor physical and mental health can have an adverse effect on many aspects of life, including daily activities, social interactions and educational achievements, especially for children and youth. This places them at risk of numerous societal problems, leading to exclusion and exploitation. Thus, air pollution is “suffocating” the development and future of youth.

According to UN Environment, the effects of air pollution are more serious for children than adults. Since children are still growing, air pollution harms them during the developmental stage of life, causing lifelong health problems. Exposure to air pollution at a young age can hinder lung growth, inhibit brain development and increase the risk of conditions such as asthma and pneumonia. Illnesses due to air pollution can result in children missing school days, negatively impacting their education.

As part of their campaign, Salesian missionaries are advocating for certain actions to combat air pollution including: advocating for active and rapid mass transportation systems; pushing for higher vehicle emission standards; reducing food wastage and promoting healthy diets low in red meat;  improving wastewater treatment in facilities and institutions at the local level; switching over to renewable energy sources; and changing over to improved lighting systems and low emission cooking stoves.

The Don Bosco Green Alliance is calling on communities to engage in activities on World Environment Day that bring awareness to air pollution and ways to address the growing problem. The Alliance, an international collective of young people from Salesian institutions and organizations that contribute to global environmental action, thought and policy, has gained more than 100 members over the last year. It was launched in April 2018 in India and in just the span of one year, gained 103 registered members from 35 countries. Membership is open to all Salesian institutions and organizations worldwide.

“The Don Bosco Green Alliance is an important part of our Salesian youth ministry today,” says Father Savio Silveira, the convener of the Alliance. “Young people feel very strongly about the environmental crisis since they understand well the impact it has on their lives and their future. Accompanying young people as they seek solutions to environmental issues has to be an aspect of our youth ministry. Care for God’s creation is very definitely an integral element of our Salesian youth spirituality.”

Don Bosco Green Alliance members work to create an environment that is safe and caring for all life on the planet while building up a new generation of environmentally committed citizens and leaders. The Alliance’s priorities are combating pollution, reducing global warming and eliminating disposable plastics. In each of these areas, it aims to partner with ongoing global campaigns promoted by the United Nations Environment Program (UN Environment) or other international organizations.

Members of the Alliance have also undertaken such initiatives as environmental education to increase green areas and planting trees, the reduction of the use of non-degradable materials, promotion of organic agriculture and home gardens, preservation and conservation of water and increasing the use of renewable energy sources.